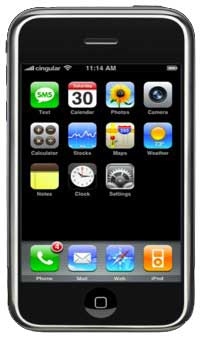 note: raw notes scribbled during the keynote. these will be edited and reposted at some point in the near future.

update: changed my mind. too tired to edit. i will just add the photo and the ‘read more’ link, fix the typos, and leave the ramble as is. To skip the ramble and view the actual keynote, click here.

“Thank you for coming. We’re going to make history together today.” one year ago, announced switch to intel. only took 7 months.

Ad for vista – funny – makes fun of how hard it is to upgrade to vista.

no wireless. one network – ‘priority’ – too weak to connect; connected for a second.

wait in line for an hour or two. thousands of pairs of blue jeans doing the keynote shuffle. into an overflow room. watching steve jobs on a screen. sitting next to projector.

itv – new name is apple tv. looks like a mini. “enjoy media on your big screen tv”. buy music on itunes. download on mac. put it on your ipod. watch it on your tv. transmit content wirelessly from computer to tv. no power brick. easy to use. 720p HD video. 40GB HD. Up to 50 hours of video. 802.11 wifi b + g + n. Intel processor. video, music, photos. designed for widescreen tvs. autuosync content from one computer. stream content from up to 5 computers.

i want geek tech. tired of media. at least there is a few seconds of green day. this is lame. i’m pretty convinced that something very cool will come. i wonder if it will be an iphone, or whatever it will be called.

pause. clear throat. “this is a day i’ve been looking forward to for 2 1/2 years. every once in a while a revolutionary product comes along that changes everything. …… in 1984 we introduced the macintosh. in 2001, we introduced the first ipod. … well, today we’re introducing 3 revolutionary products. the first one is a wide screen ipod with touch controls. the second is a revolutionary mobile phone! and the 3rd is a breakthrough internet communications device. an ipod, a phone, and an internet communicator – 3 times – are we getting it? these are not 3 separate devices. this is one device and we are calling it iPhone! today apple is going to reinvent the phone and here it is. funny picture of white ipod with dial. problem with “smart phones” – not so easy to use, not so smart. “we’re going to reinvent the phone”. start w/a revolutionary new user interface. keyboards there whether you need them or not. keyboards fixed in plastic; same for all apps. “buttons and controls can’t change” what do you do? how do you solve this? With a GUI and a mouse? Get rid of buttons and replace with a giant screen. stylus? no? you lose them. nobody wants a stylus. Pointing device is fingers! far more accurate. ignores unintended touches. patented! multi-finger gestures.

software – breakthrough – 5 years ahead of any other phone. iPhone runs OS X! wow. finally! desktop class applications and networking. “people who are really serious about software should make their own hardware.” – alan kay

slide finger across to wake it. can’t happen by accident in pocket. pretty. cool. 5 buttons across the bottom. scroll with finger. this is pretty freakin’ cool. now it is starting to feel like a keynote. more green day.

you can watch widscreen tv and movies on it. choose to fill screen or widscreen display (landscape view). feature length movies.

visual voicemail. you can see them all in a list. voicemail from al gore. says congratulations on the iphone. listen to whichever ones you want. SMS texting. multiple session texting. qwerty keyboard pops up. error prevention and correction. fast to type on.

“it’s the internet in your pocket for the first time ever’. Google search, google maps. Dr. Eric Schmidt, google CEO comes onstage. He’s on the board now.

Yahoo! Jerry Yang, co-founder and chief yahoo. Multi-mega-conglomeration. apple/google/yahoo. i am afraid. Marketing genius adding that exclamation point at the end of Yahoo!. He is a geek. Blackberry without the exchange server. he speaks of form factors. backend services. he thanks steve.

steve speaks of pleasure working w/google and yahoo and thanks them. Demo of the iphone in a “real life scenario”. Picks a song in ipod – red hot chili peppers. gets a phone call, music fades out, screen changes. answers call. phil schiller on other end asks him to send a photo. steve pushes home button, goes to photos, finds photo, clicks on a button to mail photo. puts photo in a message. sends it to phil. still one the phone. want to see a movie? searches movie on fandango. ‘night at the museum’. plans movie date. ends call.

it is a tiny computer. but can you play warcrack on it? filed for over 200 patents for all the inventions in iphone. Steve says “iphone is like having your life in your pocket. it is the ultimate digital device.”

price… 4GB – $499, 8GB $599. Available in June. Europe by 4th calendar quarter. Asia, 2008. Partner will be Cingular. Exclusive partner in US. Will sell through apple stores and cingular stores. steve introduces Stan Sigman, CEO of Cingular. Stan says they entered into contract without ever seeing device.

the conglomerate grows. apple google yahoo cingular att. i am waiting for the announcement of partnership with microsoft. not even kidding. oh, that happened last year. i wonder what it all means. cool technology for sure. hopefully not the end of the world. maybe they will save the world instead. could happen. not likely, but you just never know.

still waiting for ‘one more thing…’. but first, let’s look at how big the att/cingular empire is. clicker is not working. haha. steve tells of steve wozniak and him (mostly woz) making tv jammer in high school. screws up tv. fixes it as soon as someone gets up to fix it. working now. good save steve. mobile phones have most gigantic market share compared to other electronics. looking for 1% market share in 2008. 10M units. this is how the other half lives. thanks to us folks in the half that live beyond our means and buy all this stuff. Apple is dropping the ‘Computer’ from Apple Computer, Inc. Now known as Apple, Inc. to reflect product line.

wayne gretzky quote – “i skate to where the puck is going to be, not where it’s been.”

thank you very much. standing ovation. asks people who worked on the products to stand up and get applause. yay everybody. thanks the families of the people for being supportive.

John Mayer comes out and plays a song. don’t know the song. not in the mood. too slow. i hope he starts rocking at some point soon. makes my mind wander from apple. that is impressive. happy birthday nancy. will meet root a little bit later. my macworld buddy. she will be psyched about the iphone. too bad they cost so much damn money. maybe next year. can’t afford the monthly service anyway. song is over. thanks john mayer. i wonder if he gets a free iphone. says something about all this being the exact opposite of terrorism. i wonder. big corporations have so much power. if they’re so good, why does the world still suck? can’t apple, inc cingular att google yahoo do something to fix it? that would be way better than an iphone. time to stop thinking now. he plays another song. ‘waiting on the world to change’. nice guitar. still not in the mood. it is over. steve says thanks. lights on.