I am at Lake Merrit, about half way around. Online. This is cool. I am trying to type with 2 thumbs. Better than last time I tried. Still appreciating David Pogue’s punctuation shortcut every time I use it.

It is so nice to be able to leave the house again. The water helps my brain. Easier to think now. Stopped to look at birds that are right here in front of this bench. This rocks! There is no wifi here but I am on the internet. Magic. 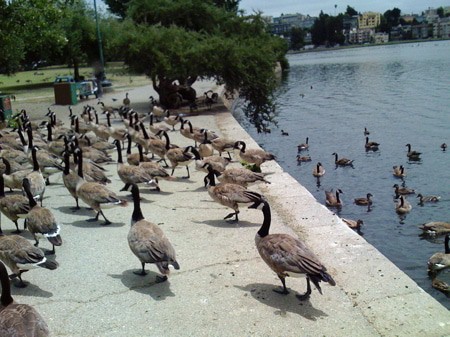 At the bus stop now on MacArthur Blvd. It is still loud in my head but better than before. It is time to go home now. It is very hard to think. Someone who lives near this bus stop has unprotected wifi. Thank you stranger.

Back home now. The bus was crowded. No seats. Standing in front of the yellow line and the driver kept letting more people on at every stop. I don’t think that is legal. Usually the driver tells people to get behind the yellow line. Didn’t have to get off before my stop. That is a rare and beautiful thing.

I wish I could think. Or work. Or play. Or read. At least I got lots of work done this morning. Another reason why it is so much better to work for myself than for someone else. If I worked somewhere else, the morning hours would be lost and commuting would have zapped all the energy that I would have had for working.

I find myself wishing there was a copy of BBedit on the iphone that would sync w/my computer. I notice that I compare it to a computer more than to another phone. What would it be like to code on the iphone? Hard to imagine. I would have to get way faster at typing and it is hard to even imagine what having the numbers and symbols and letters on different keyboards would be like. I didn’t even notice if there were curly braces on any of them. You never really appreciate curly braces until they are gone. It is a cool phone, but definitely not a laptop replacement.

I was thinking about strange things on my way home from the bus stop. At one point, I rolled up my sweatshirt sleeve and somehow ended up holding a bee in the opposite hand. I flicked it off of me. I am allergic to bees. Not very bad, but it seems to get worse every time. When I was younger, just a little sting and maybe swelling. The last couple of times huge swelling and the very last time I got a fever too. I haven’t been stung by a bee in a long time.

I like to watch bees and to think about bees, but not to hold them. I like the way they fly around flowers. Up and down, back and forth, fly away and then come back again. It looks random, but I don’t think it is. It is their way of doing things and it works. They get the job done. Very different than ants. Ants like straight lines. When they are doing their job, they don’t look random. They look very organized. I don’t like watching ants. It stresses me out. Part of it is that I hate killing them and sometimes have to when they are crawling up my kitchen wall in a line. It is not an ant friendly world. There is no way I can feel right about wiping out an entire community in less than a minute but I do it anyway. What a strange world.

Humans as a species sometimes remind me of green belts in karate. It is a transitional period of having knowledge and power, but not necessarily knowing how to use it. Sparring with a green belt is much scarier than sparring a black belt. I know I am safe sparring with a black belt. I have been hurt more than once sparring a green belt. With the exception of the occasional teenaged boy who has something to prove, they usually don’t mean to hurt anyone but they can strike hard and are still learning to control their techniques in an amped up situation.

Humans have enough knowledge to make theories based on things that they don’t have complete information about. How do I know I am better than an ant? What gives me the right to decide that they have to die because I don’t like having them in my house? Why do we think we are the most intelligent species? If you check the facts, we are obviously not. Without humans, there is balance and an ecosystem that works very well. We kill each other and we kill our planet and it has gone on for so long that it is hard to see another way to live. We don’t know how to live in a different kind of world. I am sure there are human societies in the world that know how, but if we find them we will steal their land and try to make them be like us. Welcome to PMS week.

The other reason that I don’t like watching ants is because I can’t do it without thinking. It is like trying to read in the same room where there is an interesting tv show on. When I watch a bee, it is just part of everything. Something to anchor my attention in the background. Keeps me connected to the world while still being able to leave it. I like that.

4 thoughts on “very random thoughts from the lake”