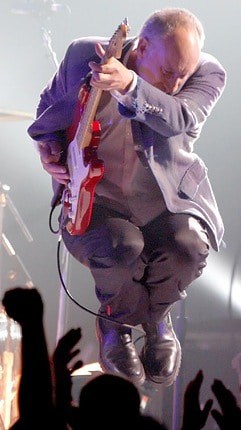 I am still having a very hard time with school, but I am tired of whining about it. Decided to take a break from driving myself insane and not getting anything done. It is several hours later and I realize that I am not miserable and exhausted anymore. Doesn’t help my school situation any, but it did wonders for my brain. Suddenly it is filled with happy things.

Saturday night, there was a VH1 Rock Honors show at UCLA’s Pauley Pavilion. It will be aired on VH1 on Thursday. VH1 has been having tons of Who stuff on lately. Makes me happy. The Who is one of my favorite bands of all time, and in particular, the one that made my teenagerhood bearable. Lots of performers played at the show including The Who, Pearl Jam, and Tenacious D. I also love the D.

Karate was very fun today. Only did actual karate for half the time, then heard some great stories about martial arts history and got to see a bunch of cool videos of our teacher learning from “the professor” (Professor Chow, I think). I love that kind of stuff. I like Kenpo. It is a lot like Cuong Nhu, but with more emphasis on the Chinese styles than the Japanese. I like my new school because daytime classes are very small and not as structured as night-time ones. I also like the teacher. He is patient and shows me things until I get them, then moves on to the next thing.

Speaking of good stories, I have been taking a break from Shikibee (main World of Warcraft character) and leveling a balance druid named Terunapekere on The Scryers realm. I want to be a moonkin. The Scryers is a role-playing server. I joined a great guild called Claws of Fury. I think I have had more interaction and done more things with this guild than with all of my other WoW guilds combined. It is more comfortable to interact for some reason. Role playing is fun. It is not required and there is plenty of OOC (Out of Character) chat, but it makes the whole game different. I had the level 70 blues with Shikibee and needed a break. I am not a big raider and got totally sick of the daily quests. The game was not fun like it used to be. Until I started playing Teruna.

Yesterday, we had a guild meeting in Thrall’s Chambers in Ogrimmar. Did I mention that Teruna is a hordie? We sat in a circle and the guild master, Grimstad, stood in front. First he made a few promotions, including Teruna. Then he promoted one of the members (Dreamwalker) to a special rank called Lore Keeper (or something like that). Dreamwalker then told us a great story about how thunder lizards got their lightning. He told the story on the /say channel which means any players in the nearby area could hear it. Other people sat down to listen to the story too and I read it out loud so K could hear it too. After that, we went to Gnomeregan and totally wiped, but it was lots of fun anyway.

Latest good thing of the day is that the update to WordPress 2.6-RC1, which I was doing while writing this in TextEdit, went without a hitch. I heart WordPress.

Nice to think about good things for a change. Still no idea what I will do about school.

3 thoughts on “The Who and Other Good Things”