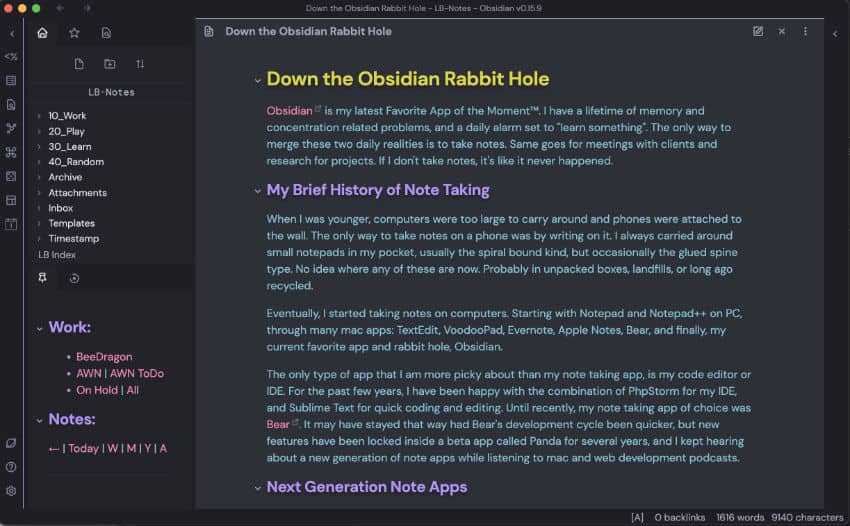 Obsidian is my latest Favorite App of the Moment™. I have a lifetime of memory and concentration related problems, and a daily alarm set to “learn something”. The only way to merge these two daily realities is to take notes. Same goes for meetings with clients and research for projects. If I don’t take notes, it’s like it never happened.

My Brief History of Note Taking

When I was younger, computers were too large to carry around and phones were attached to the wall. The only way to take notes on a phone was by writing on it. I always carried around small notepads in my pocket, usually the spiral bound kind, but occasionally the glued spine type. No idea where any of these are now. Probably in never unpacked boxes, landfills, or long ago recycled.

The only type of app that I am more picky about than my notes app, is my code editor/IDE. For the past few years, I have been happy with PhpStorm for my IDE and Sublime Text for quick coding and editing. Until recently, my note taking app of choice was Bear. It may have stayed that way had Bear’s development cycle been quicker, but new features have been locked inside a beta app called Panda for several years, and I kept hearing about a new generation of note apps while listening to mac and web development podcasts.

The podcasts led me to explore Notion, Craft, Drafts, and Obsidian. Of these, Notion and Craft were too block oriented and opinionated for my tastes, Drafts was too basic, and Obsidian was an amazing surprise. A notes app that you can customize with CSS and JavaScript, and that has its own query language? A match made in geek heaven, or at least web developer heaven. Combine that with the fact that it works on top of a bunch of markdown files in a folder instead of a proprietary database, and that it syncs with iCloud, and I was instantly hooked. And, it’s free! There are several ways to contribute to the developers, and I will definitely be doing that in the near future.

Migrating my notes from Bear was pretty easy. Used these instructions if anyone else is considering the same path.

I migrated over 1000 notes that have lived in most of the other apps mentioned at some point or other. They were easy to organize in Obsidian. I had everything tagged in Bear because there were no folders. At some point while using Bear, I nested all my tags into a few categories to keep the tab panel neat and foldable and not too overwhelming.

In Obsidian, I sorted my most recent notes into 5 folders (Work, Play, Learn, Random, and Archive). Every file older than a month or not directly linked from my main index file went into the Archive folder. My main index file got cleaned up and moved into Obsidian’s sidebar (see image), and I imported my attachments to a folder called… Attachments. I like to keep the folder structure broad so that I don’t have to think about where things go. Since using Obsidian, I have added a Templates folder, an Inbox for files that need to be processed, and a Timestamp folder for daily notes and other time based files. Each folder has an index file that lists everything in it, which is created with this dataview query:

The query above requires the Dataview plugin.

Obsidian is extensible with themes and plugins and has a very large, active, and helpful community. The small core development team is also very active and responsive.

I have a 6 core and 13 community plugins active and am currently using the LYT theme (by Cecilia May on commission from Nick Milo). I also like the Minimal theme (by kepano) with the colored headings turned on. My favorite plugins are Dataview and Templater, with honorable mention for the Paste URL into selection plugin, which seemed like it wouldn’t be that helpful since it is easy to insert a URL, but which I use so much that I appreciate its awesomeness.

Also, if you fall down this rabbit hole, here are a few of the very helpful people on the internet who have fallen down the hole first and generously shared their knowledge:

Coolest new things I have been doing with Obsidian

In Bear, I had an index note that linked to other notes that I frequently referenced. I also used the index note as a scratchpad to write any other note that I did not want to lose track of. Not sure why I didn’t just link these to other notes, but it wasn’t part of my workflow.

When I started down the Obsidian rabbit hole, I learned about the concept of daily notes and have found them to be extremely useful. I have a template that generates the note with a ToDo list at the top and grabs all ToDos that are due that day or are overdue from all other notes via a query. These are all checkbox items with or without due dates and priorities, managed by the Tasks plugin.

Next is a Notes section where I write random notes that I take during that day, followed by a Log that shows all files that were created and modified during the day in a nice table generated by a dataview query. Below that is the list of tasks completed during the day, a random quote from the internet, and links to the previous and next days notes.

When the note is generated for the day, there is a task to review the previous day’s note linked to that note. I have found it very easy to process a single day’s note at one time and usually just go in and move the notes to a place where they will be easy to find, leaving a link to them in the daily note so I can see what notes I worked on that day. Thanks to the Note Refactor plugin, I can do all of that with a single keystroke. This takes less than 5 minutes, and I love not having one giant note where I can never find what I am looking for.

Obsidian, especially when combined with the Templater and Dataview plugins makes use of YAML front matter data.

I keep all of my client data in AirTable, but have been experimenting with a database in Obsidian with 10 of my current clients. I have a button to generate a new client using a template that will fill in all of the relevant information, or at least leave place holders for me to fill it in. That data can then be pulled into lists and tables throughout my notes, which is very handy.

I have another template for meetings that will take the client ID as a YAML data parameter, which allows me to include a list of all meetings with the client on the client page that populates itself automatically whenever I create a note for a new meeting. This is a thing I never did before because I could never remember to manually make the connection every time. Now, I don’t have to. The meeting list is part of the client template. I am taking the meeting notes and keeping the records in Obsidian, so there is no need to remember to transfer any data. The data and queries are part of the templates, so I don’t need to remember to add them.

I can see why some people refer to these systems as second brains, but for this type of organization, almost any system works better than my actual brain, and the more automation, the better! I have more automations going on than I care to mention in this post, but I will say that combining notes, todos, and client/project information into a single app has done wonders for my organizational problems, especially since my notes app is the only one of those things that I always keep open and never forget to look at because I am always using it.

The mobile experience on Obsidian is not great. I am using it on my phone and iPad. It takes a while to open and sync (under a minute, but Bear was almost instant), and occasionally re-syncs while I still have it open. For this reason, I have been mostly adding new notes in Drafts and transferring them later when I am on my computer, and only opening Obsidian on mobile for reading notes, and occasionally writing them if it is already open. This is not ideal, but not a difficult tradeoff so far. Hoping for improvement in the mobile app experience and wondering if Obsidian Sync works any better than iCloud sync.

Geekiest thing I have done with Obsidian

If it wasn’t for the mobile app, I would easily give Obsidian 5 stars, but for now, it gets 4. Overall, it has been a great experience to discover and use Obsidian and I would recommend it to anyone who takes a lot of notes and likes to automate and customize things. It is especially recommended for people who think that CSS, JS, and SQL are fun 🙂 For simple note taking, Bear (if you like using Markdown), or something like Apple Notes is probably better.