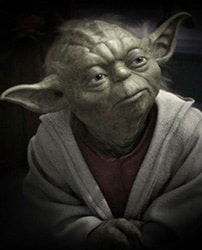 I am not a Jedi, so I suppose those words were not meant for me, but from what I can tell, trying = effort and everything takes effort. Therefore, there is a try.

Went to another aspie meeting on Sunday. Not sure if I liked it or not. It was nice to see the people I knew from the other meetings and meet the new people. Other than that, it was just like hanging out with any other group of people. That was very disappointing. It started out okay. A go around introduction. Not the kind of thing I generally like, but in a group like this, it seemed appropriate.

I usually like hanging out with other autistic types because different rules apply to social interaction than with most other people. At the group on Sunday, this was not the case for most of the meeting. After the go around, things got very disorganized. People were having back and forth mini-conversations, changing the topic, and generally having a “normal” group interaction. I can not do that most of the time, especially with people I do not know very well. One of the main reasons I even went to the meeting was to get a break from that kind of thing.

I am not sure how I would make it better next time. About half the people in the group did not seem to have a problem with how things were going, and the other half did not speak very much, if at all. The group leader is a great guy and he did make an attempt at giving the quiet folks a chance to speak. I appreciated it, but could not think fast enough when the opportunity was given.

It makes me worry that I will never be able to have comfortable social interactions. I like people and can usually talk with someone about a topic that I know a lot about like computers. I can process information about computers quickly. It is a language I understand.

I can not keep up with a conversation that changes focus and has no order. I do not know the rules of speaking in a group. When do I say something? Usually I try to wait until someone is done speaking, but almost always, someone else says something before I can. I hear things delayed, so there is no way for me speak right when someone else stops speaking.

It is also hard for me to say what is in my head when it is my turn to speak. The words get stuck and my mind goes blank. It takes so much effort to even spit out a basic outline of what I was thinking. I can’t just do it, Yoda. I can try. Once in a while it works. Always, it is exhausting.

The words jumble and crash in my head. I have software that lets me create flowchart-like images of what is in my mind. At the click of a button, the software will immediately turn it into a formal outline. I wish I could install that software in my brain. Do other people have a natural ability to do this? Is it something they learn? Do they already think in straight lines and not even need this software?

I will probably try another meeting. I wish I could think of a way to make it easier. I think part of the purpose of the group is to practice social interaction in an environment where others will understand the pauses and silences.

I appreciate the fact that I do not have to speak if I don’t want to. I usually don’t want to. But it is not because I don’t have anything to say. It is because I lack the ability to make my voice speak for my brain. It frustrates me terribly and even causes me to question Yoda. If Yoda does not have the answer, who does?