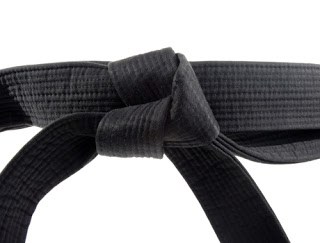 After 16.5 years of doing martial arts, I finally got my black belt a couple of weeks ago. I am still a little shocked, but it is very exciting. I’ve been very close a few other times and have a collection of brown belts, but I had mostly given up on getting a black belt. I love doing martial arts no matter what color belt I am wearing, but after 12 years of wearing a brown belt, it starts to seem like you have reached the limit of what you can learn.

I am a slow learner. It can get discouraging when you are learning something with other people, and at some point, they all pass you and move on. Sometimes people who you used to teach become your teacher. Sometimes things are extra frustrating because no matter how hard you try, you can never make it to the next level.

After leaving my first school (Tuyê’t Tan dojo in Berkeley, CA) due to a change in medicine making it too hard to go to night time classes, I tried a few other schools. It is the teachers that make the school. There are many styles of martial arts, and people will always argue about which one is “the best”, but I really don’t think it matters in most cases. I think that no matter what martial art you are doing, having a good teacher is the most important thing.

I think if I kept doing Cuong Nhu, I would have gotten a black belt. Cuong Nhu is awesome in so many ways and I am very lucky to have stumbled into such a wonderful dojo with such amazing people. Those people are still my friends and I thank them all for being so patient and helpful to me for so many years.

Had some not so ideal experiences with a few other schools, but didn’t find another great school until we moved to Baltimore a couple of years ago. Palanzo Martial Arts in Pikesville. Seemed random at the time, but turns out that Karen and several of her friends passed through there at some point while they were growing up.

Once again, I was very lucky. Mr. Palanzo’s school is awesome. Mr. Palanzo, aka Mr. Joe, is awesome. Every instructor I have had there has been both a really great martial artist and a really great teacher. That is a very rare combination, even though you would think it would be a requirement in order to work at a karate school.

Mr. Joe thought I could be a black belt, and I did not completely believe him. I didn’t think he was lying, but that he really didn’t have any idea how bad I am at learning. But he found ways to teach me, just like my teachers at Tuyê’t Tan did. It takes a special kind of teacher to figure out ways to teach students who do not learn in the standard way. Just being willing to try to figure it out is a big thing, and the appreciation I feel toward these people for doing that is really more than I can express in words.

Thanks to Mr. Joe, Mr. Chris, Mr. Marcos, Mr. Tom, and classmates at Palanzo Martial Arts, and to Master Allyson, Senseis Amy, John, Raimi, and Anastasia, and Lavina and other classmates at Tuyê’t Tan. Special thanks to Karen, to my family, and to TC for above and beyond extra special awesomeness.