Today is the 8 year anniversary of K’s and my first date (Thursday is our 4th wedding anniversary 🙂 ). Difficult times and all, these have been the best 8 years of my life.

K has changed my life in so many ways and opened my mind and heart to possibilities that I never thought were possible.

Before I met K, I had never wanted to live with anyone other than random friends and strangers. I thought it would drive me insane and even thinking about it put me into an immediate state of panic. For some reason, that did not happen when I thought about living with K, and I have loved every minute of it since the first day she moved into my house in Berkeley (with aforementioned random friends and strangers). I have loved it even more since we have gotten our own house.

A few other things that have changed:

There are many more things, but I will not list them all here. I will say that these kinds of things happen because of a kind of trust that I have never had before.

I have been thinking a lot lately about the relationship between truth, logic, and trust.

Over the years, I have learned that logic can be situational. That lesson has saved my sanity more times than I can count.

I have a lifelong fascination with World War II that is focused on trying to understand the conditions in the world that allowed the Nazi Party to come to power and exterminate over 10 million people and how the US could nearly wipe two entire cities and their mostly civilian populations off the face of the earth by dropping atomic bombs on them.

I have come to the point where I can understand the desperation that would allow people support the Nazis, and the fear of punishment or death combined with feeling powerless that would stop them from speaking up. I do not think I will ever understand the inhumanity of what the Nazis or US government did to so many innocent people.

This kind of situational logic can make sense of things that would otherwise seem completely illogical. Unfortunately, it can not make sense of everything.

One thing that I have learned from being with K for all these years is that there can be truth without logic. This has been one of the hardest things I have ever learned and it is still very difficult to accept it at times.

Here is an example:

Truth A: I tell K that I hate surprises and make her promise never to throw me a surprise party. She agrees.

Truth B: After knowing Truth A for years, K throws me a surprise birthday party.

When I think about this, it seems completely illogical. Why would she do something that I specifically asked her never to do?

But nothing is that simple. There are other truths to consider — other variables and frameworks that affect the situation:

Truth C: K loves me and wants me to be happy. She is aware of what is going on in my head and in my heart. She would never do anything to hurt me.

Based on my simple logic, these 3 truths can not coexist and all be true. But they are truths, so they are true. This tells me that I need to look outside of my own logical framework to understand. Understanding things is very important to me.

In the case of this example, Variable 1 is K’s internal logic. This is my interpretation of that logic at work:

K’s Internal Logic (as interpreted by me):

In this framework, it is completely logical to throw me a surprise birthday party. Even though it was totally outside of my own logical framework, the party had its intended effect. It made me happy. I had a great time and I was reminded that I have great friends that care about me.

My own completely logical logic would not have led to these conclusions. Sometimes, logic is not completely logical, especially when there are human beings involved. It is things like this that make life very confusing.

Thinking about all of this makes me realize the importance of logic and truth and how it can be especially important to autistic people that have a hard time deciphering hidden information. By hidden, I mean that it is never communicated directly. This missing information can be the difference between understanding and trusting someone, and isolation from people because of not understanding or trusting them.

To a person who takes things literally and is not so good at ‘reading between the lines’, understanding the logical framework of something can be very important. It seems to me like many people automatically understand things based on a shared logical framework that I have never had. It is the framework of human interaction and includes a set of common beliefs that seem illogical to a person who is not operating within this framework. I am not sure if other people have to work so hard to make sense of these things or if making sense of them is even so important to other people.

K is a person who makes sense to me and a person who understands me. That is a rare and beautiful thing and there is not a moment when I do not know how lucky I am.

One more reason why K rules — She just got us tickets to the sold out Grateful Dead show (to support Barack Obama) at the Warfield tonight! She checked online because sometimes they release tickets on the day of the show. Genius! The show was sold out again a few minutes later. 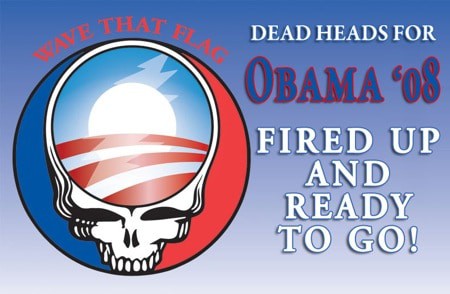 4 thoughts on “The Importance of Logic”