Amanda at Ballastexistenz has written an excellent post for Blogging Against Disablism Day describing what it is like to be autistic and taking a look at the trend of accusing people of using autism as an excuse for having poor social skills, among other things.

The post goes on to talk about techniques used by autistic people to appear “normal” and includes a video that explains how it can take all day to boil a pot of water. If a picture is worth a thousand words, that video is worth a million.

One interesting thought, which I had never heard before, is that some people might choose to be non-conformist as an attempt to mask involuntary weirdness.

There can also be attempts to mask involuntary weirdness by appearing to be voluntarily weird. Since chosen non-conformity can in some circles have higher social status than involuntary non-conformity, and since it can lead to an internal sense of being in control of one’s own weirdness, even though of course the person isn’t really.

I have always been non-conformist. For the most part it has been because I have never fit in with the “normal” people and could never figure out their completely illogical rules and bizarre system of prioritizing things. 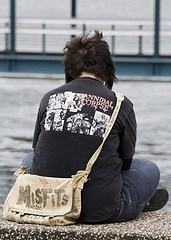 In the place where I grew up, fitting in was essential to being treated like a human being. If you looked or acted differently, you could be assured that people would treat you badly, if not to your face, then behind your back. If you were a child who was different, you were doomed to a miserable life of physical and mental abuse where people’s idea of how to help you was to make you look and act like everyone else.

In high school, I became a “burnout”. We were a bunch of misfits who hung out in parking lots and did a lot of drugs. It was the first time I ever felt like part of a group, like I fit in. I wonder if this is the kind of chosen non-conformity that Amanda is talking about.

From that point on, my friends were always part of some nonconformist group or other. The focus changed from drugs to music to peace and love to politics to computers, but the feeling of not being alone and not “having” to fit in have played a large role in my periodic decisions to stay alive and keep trying rather than giving up and killing myself.

The autism community has taken ‘fitting in’ to a whole new level for me. It is not like other groups where I share the focus of interest, but am still kind of clueless about how people’s minds work outside of that focus. It is the opposite. It is an incredibly diverse group of people with all kinds of interests that I may or may not share, a group of people that make sense to me because I can understand how they think and how their minds might take them from fact A to conclusion B.

I think that autism is a whole different way of seeing the world. Whether it is good or bad should not be a question. It affects many people’s lives to a degree where they need help and assistance with basic daily tasks, and other people’s lives in a way where they contribute things to the world that would never exist without them. Some people fall into both of those groups or any point in between. unrulyasides has an interesting post about the idea of automatically classifying autism as a disability.

I don’t really have a point to all of this right now. Reading things written by people whose brains work similarly to mine gets me thinking in a way that other things don’t. It is not that other things do not make me think. Tons of things make me think! The difference is that these things do not need to be translated into a framework that I can understand before they are processed. An entire level of energy expenditure is removed. It is nice. Still, it gets me rambling.

6 thoughts on “Thinking About Autism”